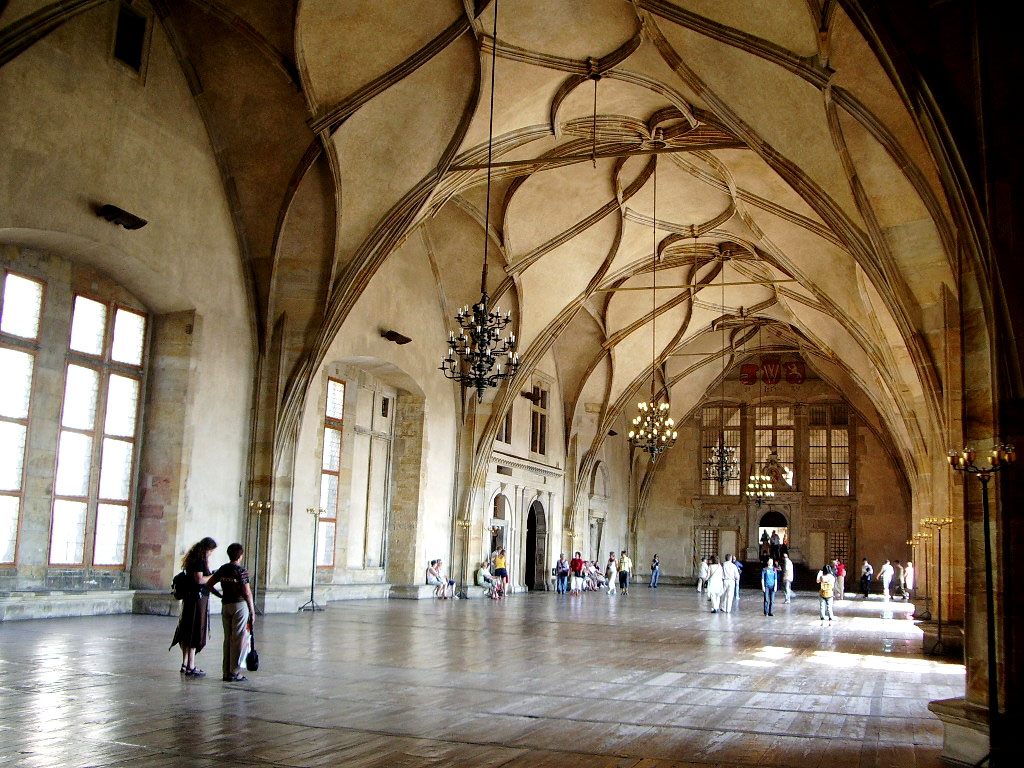 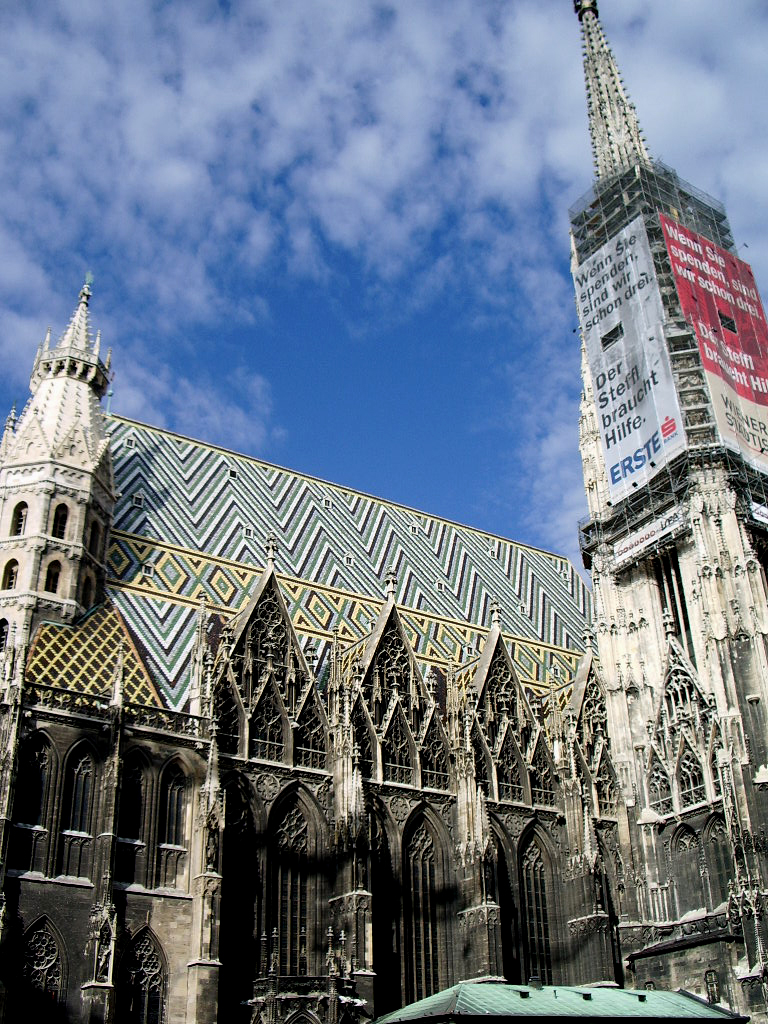 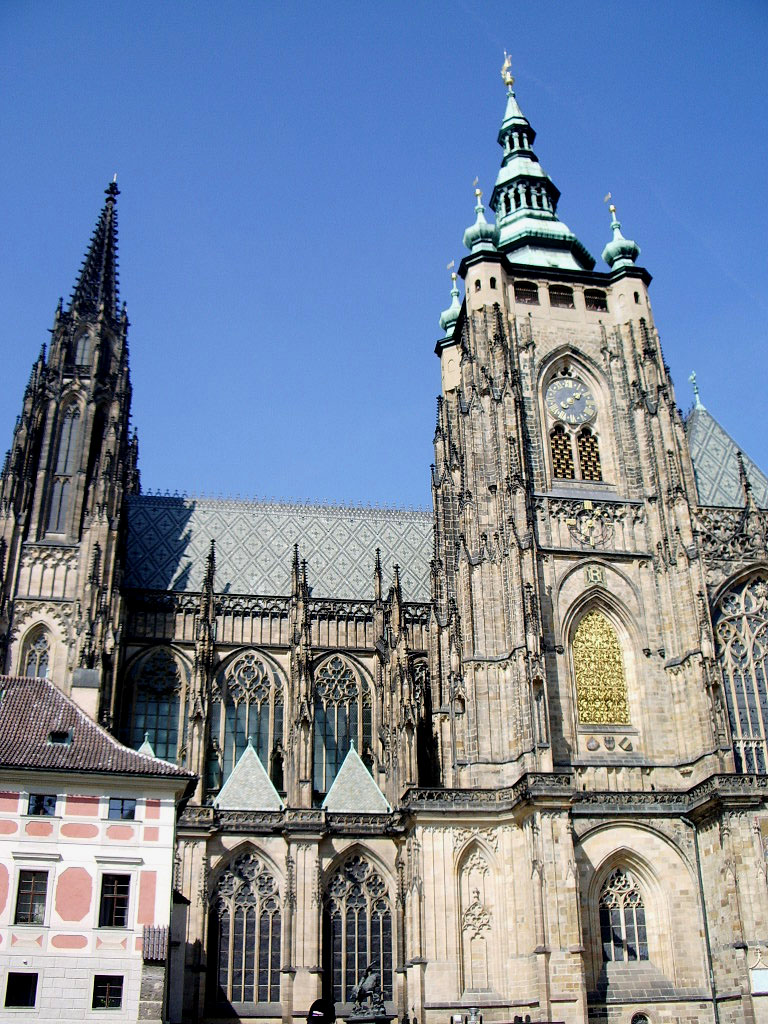 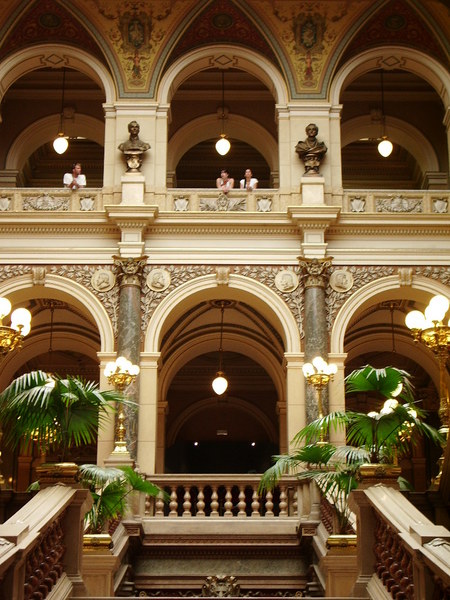 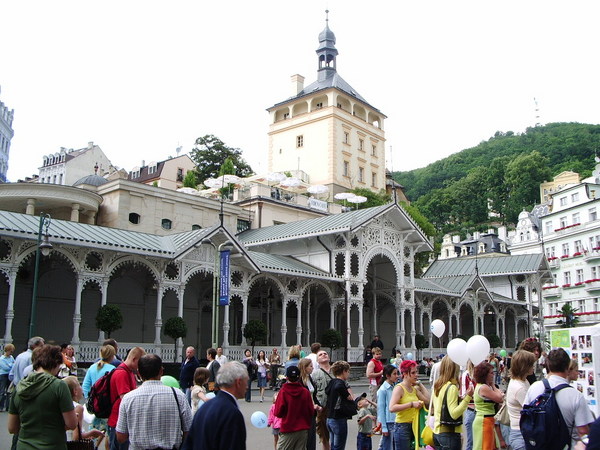 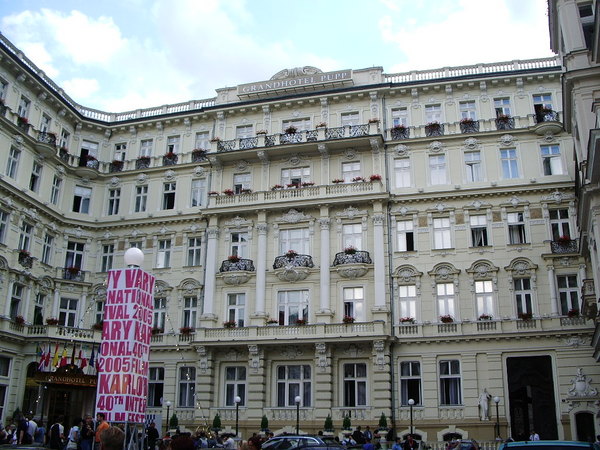 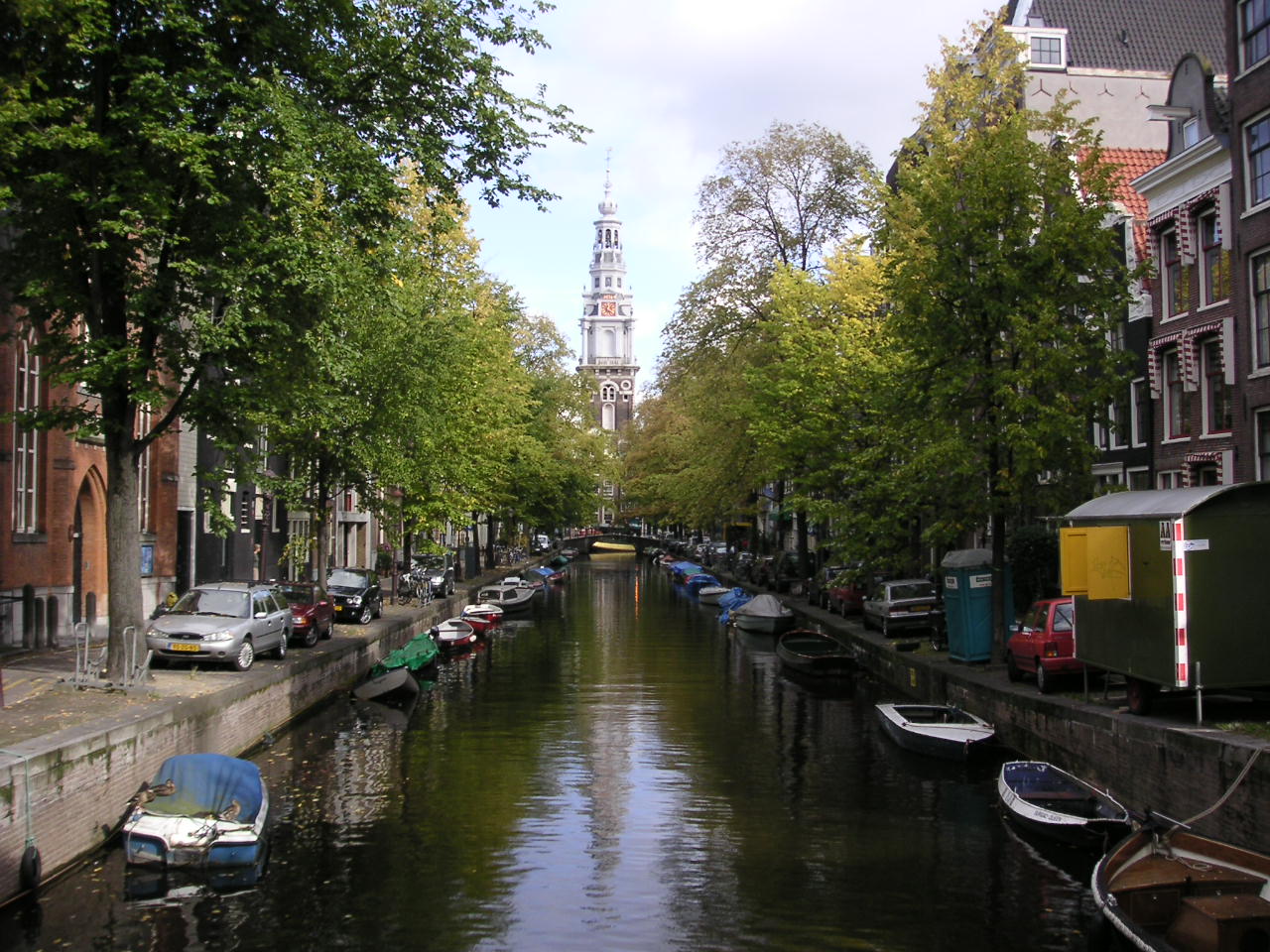 The magical city of bridges, cathedrals, gold-tipped towers and church domes, whose image has been mirrored in the surface of the Vltava river for more than ten centuries. Prague is also a modern European metropolis full of energy, music, and art.

The magical city of bridges, cathedrals, gold-tipped towers and church domes, whose image has been mirrored in the surface of the Vltava river for more than ten centuries. Prague is also a modern European metropolis full of energy, music, and art.

It's a city of contrasts: Serene green isles in the river and peaceful parks draping the city's seven hills are just steps away from the architectural treasures and bustling street life of the city center. Prague's atmosphere is both intimate and romantic, and quite impossible to forget once you visit.

During a walk through the city, you will quickly discover that the history of European architecture has left behind splendid representatives of its various periods and styles. There are Romanesque, Gothic, Renaissance, Baroque, and Classicist buildings, as well as various neo-historic styles and Art Nouveau.

Prague is also a verdant city. The hills below the Prague Castle, for example, have been shaped by Baroque architects who combined splendid palatial buildings with beautiful formal gardens full of pavilions and arbors.

Fifteen large bridges accent the panorama of Prague. Fourteen span the river Vltava, one bridges the vast Nusle valley. The oldest and the most valuable bridge was built in 1357 and bears the name of its founder, the Emperor Charles IV. You cannot miss it when strolling along the Royal Way, the famous coronation route of Czech kings connecting the Old Town with the Prague Castle.

One of the most breath-taking, as well as photogenic, views of the Castle opens up from the very head of Charles Bridge. The Castle panorama features just about all the historic architectural styles; it’s not an exaggeration to say that you are looking at a thousand years’ worth of European architecture.

The islands in the Vltava offer entirely different views of the city. Although these small islands are not very remarkable geographically, their greenery plays an important part in city life. Amidst the urban bustle of the centre, these islands are welcome oases of calm, perfect for impromptu relaxation.

The Czech metropolis abounds in theatres, concert and exhibition halls, museums and galleries. Prague truly offers something for everyone, and each of its many faces has its own special charm.

Český Krumlov is a unique architectural jewel, whose importance is underlined by the fact that it was included in the UNESCO List of the World Cultural Heritage in 1992.

Above the meanders of the river Vltava a unique complex of municipal housing developed, mainly in the 16th century, along with an extensive castle and chateau complex, the second largest in the country after the Prague Castle.

The historical seat of the Rosenberg family includes a variety of chateau buildings, the famous Hall of Masks, the unique Baroque theatre, the chateau garden with a Rococo fountain and the summer residence Bellaria with revolving auditorium, where seasonal theatre performances take place. The Cathedral of St. Vitus, a valuable architectural work of the Czech Gothic style, is a significant dominant of the town. Numerous cultural activities contribute to the lively atmosphere of the town, among them the International Music Festival, the Old Music Festival, exhibitions at the Egon Schiele Center, and the Five-Petalled Rose Festival (the rose was a symbol of the Rosenber family.).

Budapest looks its most beautiful at dawn. As the sun slowly rises over the eastern plains, bathing Pest in soft pastel hues, it radiates back from the buildings of Buda as if they were a giant mirror; the windows on Castle Hill positively glisten in golden jubilation.

But Budapest is also spectacularly appealing at night. The Chain Bridge is festooned with white lights, and the main public buildings like the Parliament, the Opera and the Royal Palace, as well as the entire panorama of the Castle District, are imaginatively and sensitively floodlit.

It's easy for Budapest to play with light in the manner of an elegant lady trying on her jewels, for everything looks good. This is a vibrant city: it throbs with life morning, noon and night; visitors arriving from other countries get the feeling that something interesting is happening round every corner.

There are plenty of other capital cities built on the banks of a river, and in many cases the river runs through the historic centre. But such a wide and majestic river, as is the Danube at Budapest, is more of a rarity. Even more exceptional is the perfect contrast between the right and left banks. Buda is built upon hills, the feet of two of them - Castle Hill and Gellért Hill - almost stand in the water. Facing it is Pest, as flat as a pancake (or, as a Hungarian might say, as flat as a "lángos", a pita-type bread popular for many a century).

It's no exaggeration to say that Budapest is one of the finest capital cities in Europe, and also one of the best situated. Among the several places in Hungary that have been afforded the classification of UNESCO World Heritage Site, the first were the Danube panorama (on the Buda side from the Gellért Hotel all along Castle Hill to Margaret Bridge, and on the Pest side from the Parliament back down to Petőfi Bridge), and Andrássy út (along its entire length from the centre of Pest to Heroes' Square, where the Millenary Monument stands on the edge of the City Park).

At the time of the Magyar Conquest in 896, the first Hungarian tribes settled in the plains to the east. They migrated to the hills further west later on to take advantage of the greater protection they offered. Buda became the royal seat in the thirteenth century and saw the court's rising status reflected in the building of ever more splendid palaces and the expansion of the town into a flowering middle class town. Pest at this time was a town of merchants and artisans.

In the history of Budapest the year 1872 stands out as a milestone, for it was then that the three separate settlements of Pest, Buda and Óbuda (literally "Old" Buda) were united. Budapest officially became the capital city of Hungary, and underwent rapid growth in size and eminence. This was the city's golden age, and coincided with the Hungarian millennial celebrations in 1896.

Budapest, now home to two million inhabitants, would appear countless times on any list of superlatives. The Continent's first underground railway was built here. From here originated more pioneering Hollywood film makers than from any other European city. Budapest was the home of such world class inventors as Kálmán Kandó, the father of electric railways, and János Irinyi, one of the early developers of matches. Hungary's two most celebrated composers - Béla Bartók and Zoltán Kodály - lived in Budapest, and Nobel Prize-winning Hungarian author Imre Kertész was born here.

Hungary's oldest academic library, the University Library, is to be found here. It is the location of Europe's largest synagogue. It is the only capital city in the world where there are more than one hundred hot thermal springs. There are no other cities of comparable size anywhere where visitors can explore dripstone (stalactite) caves in the middle of the residential districts.

It would be difficult to find another city where visitors are faced with such a choice of transport: bus, tram, trolleybus, train, underground railway, cogwheel railway, funicular, forest railway, horse-and-trap, chair-lift, boat, bicycle and on Margaret Island "bringóhintó" family cycle cars - Budapest has them all! Let's choose one, and set off in the World Heritage streets.

Vienna’s history dates back to the first post-Christian century when the Romans established the military camp Vindobona. Today’s cityscape is characterized by the abundance of baroque buildings created mostly under the rule of Empress Maria Theresia and Emperor Franz Joseph who was largely responsible for the monumental architecture round the Ringstraße.

Schloss Schönbrunn, the former imperial summer residence, is one of most popular sights. The sumptuous palace with the beautifully tended formal gardens, the Gloriette monument, the Palm House and the zoo attract hordes of visitors each year. The huge Hofburg (Imperial Palace) was the base of the Habsburgs for over six centuries, and is an impressive repository of culture and heritage.

The splendid baroque Belvedere palace today houses the Österreichische Galerie (Austrian Gallery) displaying the largest collection of works by Klimt and Kokoschka as well as famous paintings by Schiele. Vienna’s prime landmarks are the gothic Stephansdom (St. Stephen’s Cathedral), the Giant Ferris Wheel in the Prater, Vienna’s old recreational park, and the Spanish Riding School with their world-famous Lipizzan.

Vienna has more museums and galleries of international reputation than you can shake a stick at: Kunsthistorischen Museum with the world’s largest collection of Bruegel paintings, MuseumsQuartier with Leopold Museum (Schiele!), Museum Moderner Kunst (Museum of Modern Art), Architekturzentrum (Architectural Center) and Kunsthalle rank among the cities most important cultural venues. Albertina is home to the world’s largest collection of graphic arts and prints (60,000 drawings, 1 million prints), and Liechtenstein Museum presents selected masterpieces from the Princely Collections in Vaduz.

Vienna owes much of its international fame to the many celebrated composer who lived and worked here including Strauß, Mozart, Beethoven and Haydn. The Vienna Philharmonic Orchestra is one the world’s best, the Staatsoper one of the world’s leading opera houses, the Vienna Boys’ Choir one the world’s most famous. In the last years Vienna has also established itself as a great musical metropolis.

In Vienna old coffee houses and rustic wine taverns stand alongside with top modern restaurants and shops, time-honored events alternate with internationally acclaimed extravaganzas (Life Ball) to create a unique and very special ambiance. Another special feature of Vienna are its many greenspace and recreational areas such as the Wienerwald, the Prater and the Donauinsel. 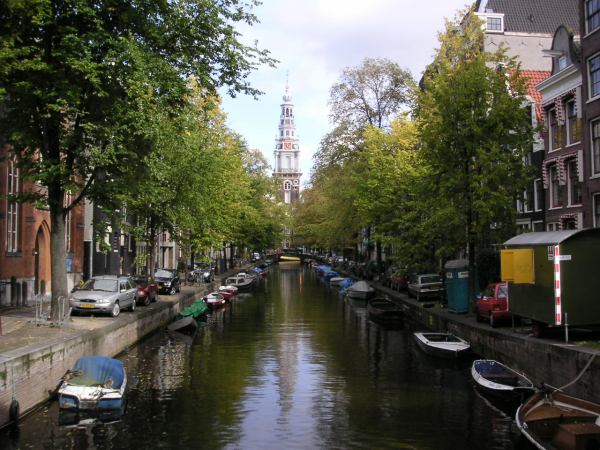 ▲top
travel is apart of my life, that's my dream travel around the Europe, and i hope i also can live in one of the country of the europe, maybe one day the dream may come true. 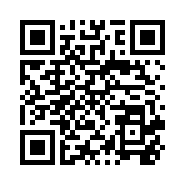